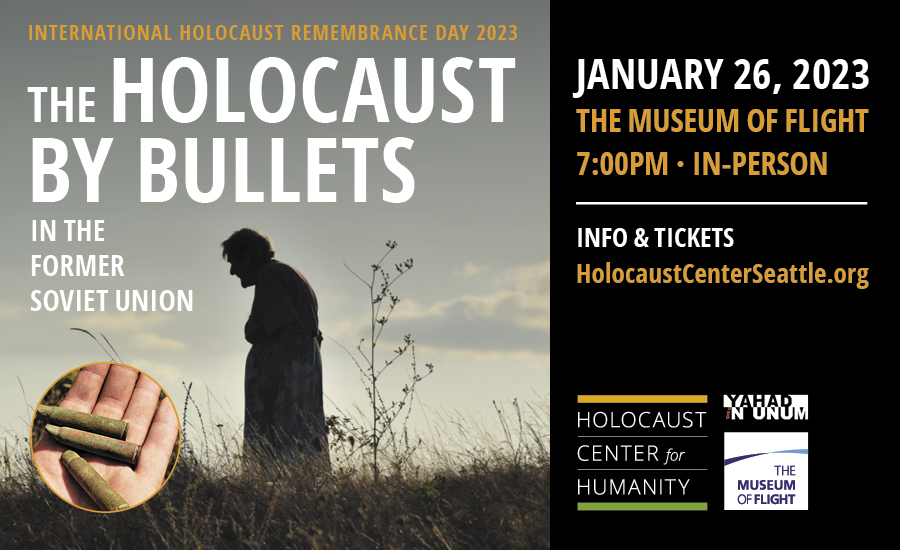 January 27 was designated as International Holocaust Remembrance Day by the United Nations General Assembly in 2005. It marks the anniversary of the liberation of Auschwitz-Birkenau.

Every year, the Holocaust Center for Humanity holds a community program to mark International Holocaust Remembrance Day. This year's program will take place in-person on Thursday, January 26th, 2023 at the Museum of Flight at 7:00pm.  Details & Tickets

Yom Hashoah, or Holocaust Remembrance Day, commemorates the 6 million Jews and millions of others who were killed in the Holocaust. The date is set in accordance with the Hebrew calendar, on the 27th of Nisan, so that it varies in regard to the Gregorian calendar. The date was chosen to mark the beginning of the Warsaw Ghetto Uprising.  This year, 2023, Holocaust Remembrance Day begins on April 17th at sunset and ends on April 18th at sunset.

A meaningful program of remembrance and inspiration with a panel of local Holocaust survivors, a candle-lighting ceremony with descendants of survivors, and words of reflection from Rabbi Simon Benzaquen of Congregation Ezra Bessaroth.

Honor and remember someone you love by making a gift to the Holocaust Center for Humanity as a tribute to them.

Your tribute gift to the Holocaust Center for Humanity will help us further our mission to teach the lessons of the Holocaust, inspiring students of all ages to confront bigotry and indifference, promote human dignity, and take action.

When we receive your tribute gift, we will send a card to the person(s) you designate with a personal message.