Graphic Novel: More Than Any Child Should Know

More Than Any Child Should Know: A Kindertransport Story of the Holocaust

By Paul Regelbrugge and Julia Thompson
Artwork by Sean Dougherty

"This book is expertly written and illustrated in a way that will keep any grade schooler’s attention while learning about the heartache and turmoil during this dark period of time." - Public speaker and educator Jeannie Opdyke Smith 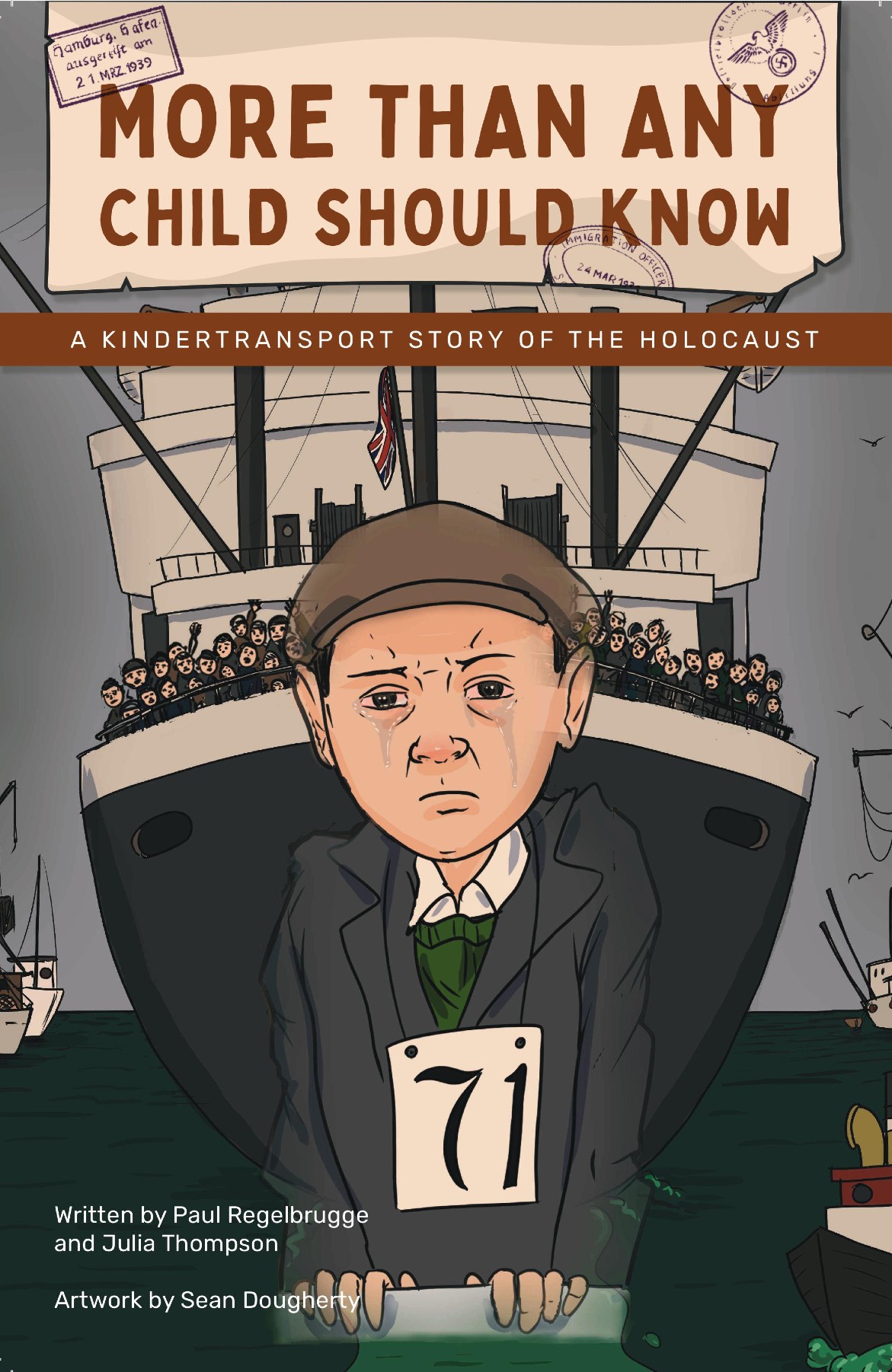 What is it like for a child of eight to leave the only home he’s ever known, traveling alone by land and sea to an uncertain future? On the eve of World War II, this was the journey of young Steve Adler. Born in 1930 to a German-Jewish family, Steve was one of the lucky ones: finding refuge from persecution and danger during the Holocaust in England and later the United States.

This true story takes the reader swirling along with moments in history as seen through Steve’s eyes: from the moment his happy world in Berlin was shattered; to separation, evacuation, and foster homes in England; and finally, to stability and strength in the United States. Steve’s refugee story transcends time and place to illuminate the costs of war and bigotry, while also offering a beacon of human hope and resilience.

Steve later emigrated to the United States, ultimately settling in Seattle, Washington. Throughout his adult life, Steve used his story to champion the importance of Holocaust education as a longstanding member of the Holocaust Center for Humanity's Speakers Bureau.

This email address is being protected from spambots. You need JavaScript enabled to view it. is the Director of Education at the Holocaust Center for Humanity. Previously, he was an attorney before teaching in Chicago, Buffalo, and Spokane and Kent, Washington. Paul has received degrees from Kalamazoo College, University of Detroit Mercy and Michigan State University College of Law, and his teaching certificate from Northwestern University. He is a United States Holocaust Memorial Museum Teacher Fellow, a Powell Teacher Fellow, and an Alfred Lerner Fellow. He is also the author of The Yellow Star House: The Remarkable Story of One Boy’s Survival in a Protected House in Hungary (Lulu, 2019).

This email address is being protected from spambots. You need JavaScript enabled to view it. is the Education Program Manager at the Holocaust Center for Humanity. She received her BA in History from Whitman College and is an avid reader and writer of various historical topics. She is an Alfred Lerner Fellow and has contributed to the online journal Women and Social Movements in the United States, 1600-2000.

This email address is being protected from spambots. You need JavaScript enabled to view it. is an artist and illustrator based in Seattle, where he lives with his wife, three children, and two cats. When he isn't painting or drawing, Sean can be found putting his psychology degree to good use as an observer of the human condition (AKA an avid people watcher) or playing with his kids in the park. This is his first graphic novel.

Learning about the events and details surrounding the Holocaust are a must. However, because of the cruelty and unimaginable crimes against humanity, teaching the subject to children can be difficult at best. The book, More Than Any Child Should Know, shares the true account of one 8 year old Jewish boy, whose life was forever changed by the events of the Holocaust. The reader follows young Stefan and his family as history unfolds from its subtle beginning through its end.  This book is expertly written and illustrated in a way that will keep any grade schooler’s attention while learning about the heartache and turmoil during this dark period of time.  I highly recommend the book as a good introduction to a very large and important topic. As a child of a survivor and rescuer, I know firsthand the necessity to keep history alive by sharing and teaching the message about what hate and prejudice can do, and how even one person can make a difference in doing something to help. - Jeannie Opdyke Smith, public speaker, educator, and daughter of Holocaust rescuer Irene Gut Opdyke

With More Than Any Child Should Know, the Holocaust Center for Humanity offers teachers and students across grade levels a resource that engages the reader with the story of the Alder family and carefully situates their experience within the larger scope of the Holocaust. While the interplay between the image and text in graphic novel offers teachers a range of opportunities to engage students in critical thinking through multimodal reading, the book also strategically integrates primary sources within the imagery of the book that prompts a more sophisticated layer of thinking for students. Aligned to Stefan “Steve” Adler’s goal in sharing his story, the authors smartly refer to various topics ranging from Japanese incarceration to Holocaust memorialization and, thus, provide teachers and students with starting points for civics-based, justice-oriented inquiry beyond More Than Any Child Should Know. - Dr. Jeff Eargle, Clinical Assistant Professor in Secondary Humanities Education, University of South Carolina

A poignant and beautifully illustrated tribute to Steve Adler, who shared memories of his boyhood in Nazi Germany, escape to Great Britain on the Kindertransport, and immigration to the United States with thousands of children in his lifetime. Through this book, full of honesty, humor, and historical context, Adler’s bravery and empathy will inspire many more generations. Highly recommended. - Rebecca Erbelding, historian and author of Rescue Board: The Untold Story of America's Efforts to Save the Jews of Europe

Borrow a classroom book set of 35 copies!  Plus check out other Holocaust Teaching Trunks with recommended texts.