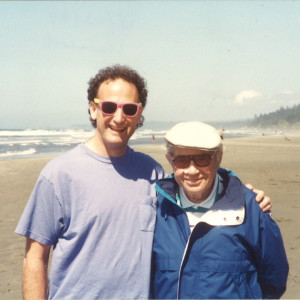 Tom Heller, MD, is the son of Holocaust survivors.

Tom’s father Paul was born in Chomutov, Czechoslovakia (now Czech Republic) in 1914. As a young student, Paul was the only Jewish student in his class. He attended Charles University and medical school in Prague and graduated in 1938. In March 1939, Nazi Germany invaded and annexed Czechoslovakia. Dr. Heller was poised to leave the country for England, but on the first day of WWII – September 1 – was arrested by the Gestapo for anti-Nazi activity connected to a university group.

He was detained as a political prisoner, sent to Dachau and Buchenwald concentration camps, where he spent 3 ½ years doing hard labor, and then to Auschwitz in 1943.  Exploiting his skills as a physician, Dr. Heller was sent by the Nazis to work at a clinic in sub-camp Jawarzno. Dr. Heller was a part of a death march to Gross-Rosen concentration camp before being transported back to Buchenwald in February 1945. Liberation finally came that April. World-famous reporter Edward R. Murrow visited Buchenwald on April 12, and in a live broadcast several days later mentioned Dr. Heller, thus notifying his friends and family that he was alive.

Tom’s mother, Liese Florsheim, was from Germany and had met Paul at Charles University in the 1930s. She was able to escape to the United States in 1938, where she earned a Master’s degree in Social Work. Liese was at the dock to meet Paul when he arrived in New York in 1946 and they were soon married. Dr. Heller became an internationally recognized medical researcher in blood diseases while raising Tom and daughter, Caroline, with Liese.

Tom also became a doctor, and worked for many years in Seattle in a community health center, and subsequently for the U.S. Centers for Disease Control, helping establish HIV treatment services in countries in Asia and Africa. Now retired, he chose to share his family story to help teach students and other audiences the dire consequences of prejudice and hate. Tom joined the Speakers Bureau in 2022. He has three grown children and lives with his wife in Seattle.

Image: Tom Heller with his father Paul in 1994.