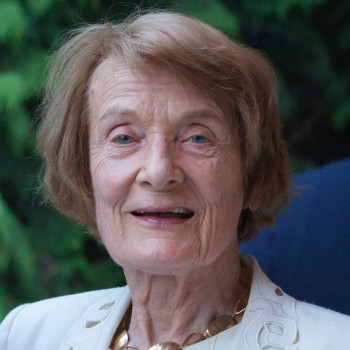 When Hitler came to power in 1933, the Nazi regime made life increasingly difficult for Jews in Germany. As a result, Barbara’s parents bribed official s to destroy documents about her adoption, which noted that a non-Jewish child had been adopted into a Jewish family. Barbara lived a happy childhood as her parents attempted to protect her from the growing danger they faced. Despite their best efforts, Barbara was still exposed to Nazi propaganda. She experienced the rapid takeover of Nazi ideology and policies into everyday life, including schools and youth organizations.

The Sachs family arrived by ship in New York harbor in 1938 and began to build a life in New York City. Barbara attended Oberlin College in Ohio and later Cornell University. At Cornell, Barbara met her future husband Arthur D’Asaro, and they married in 1953. Barbara and Arthur had four children. Barbara used a master’s degree in Nutrition to direct health oriented classes, and Arthur used his doctorate in physics in his job at Bell Laboratories in New Jersey. Barbara’s parents had some relatives who scatter ed all over the world due to the Holocaust, and others who were murdered by the Nazis.