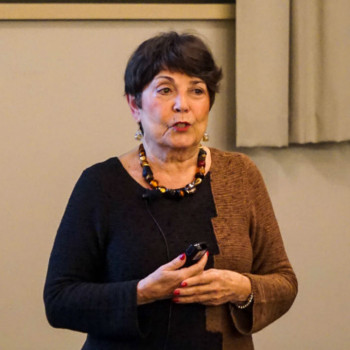 “I was hidden with a Catholic family, a couple [with] no children. They pretended I was a cousin from the countryside."
-Agi Day

Agi Day (nee Zagorka Herzog) was born in Belgrade, Yugoslavia (now Serbia) in May 1940. Her family, being Jewish, escaped to Hungary when she was a baby, and during the last nine months of World War II Agi was hidden by Catholic people who posed her as one of their own.

In 1946, the growing threat of Communism again forced Agi and her family to flee. They escaped Hungary and then lived in several Displaced Persons camps in Austria.

In 1951 at age 11, Agi joined her mother in Toronto, Ontario, where she grew up and then became a teacher. She taught elementary school and English as a Second Language in the Toronto schools until she moved to Montreal, Quebec. In Montreal she raised her children while studying French, and was active in numerous community organizations. 10 years later, Agi and her family moved to Seattle, where she continued her volunteer
activities and went back to school to get a Master’s degree in Organizational Communication.

Later , Agi pursued a career in real estate for about 15 years on Mercer Island. She is now retired but still involved as a volunteer for different organizations. Since 2014, Agi has spoken to schools and community groups about her experiences during the Holocaust as a member of the Holocaust Center Speakers Bureau.

View video testimony clips of Agi Day, see photos of Agi and her family, and read more on the Survivor Encyclopedia: Washington State.