Daughter of Dutch rescuers, Ingrid shares the story of her family's bravery to hid 40 Jewish people during the Holocaust. 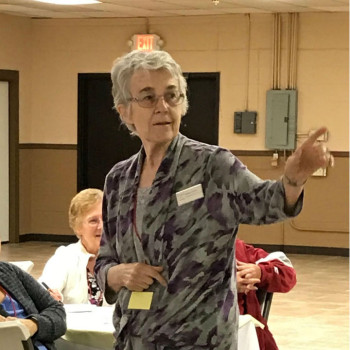 Ingrid Kanis Steppic was born in Holland in 1943. Her father, mother and older sisters hid 40 Jews in Holland during the Holocaust. She is now telling her story of this family of rescuers.

Ingrid’s family moved to Amersfoort only one day before the Germans invaded Holland on May 10th, 1940. Her father, Jan, was to be the manager of the town post office. His position allowed him to see returned mail and death notices. He realized that the Nazis were killing Jews long before many others found out, and he encouraged many Jews to go into hiding rather than register.

Jan helped Jews hide in Amersfoort or nearby Oldebroek, where he had grown up. The ‘hiders’ would first come to Ingrid’s house, and then her father would find a place for them. Her mother, Nel, was unfailingly vigilant to keep the Germans from discovering them. Her older siblings helped. Jan and Nel kept in touch with the people they had hidden.
Jan was also involved in the Dutch Underground. On one occasion, a raid had been planned on a distribution center to acquire the stamps for ration cards. Jan was forced to flee the scene and go underground. He was arrested and sent to Dachau in 1944.

Shortly after, Ingrid’s older sister Ali, was found with incriminating receipts from striking railroad workers, and was also arrested. Ali spent the rest of the war in a women’s prison, forced to mend clothing for German soldiers.

Without the pay from Jan’s job, or Ali’s help at home, Nel was hard-pressed to make ends meet during the infamous “Hunger Winter” of 1944-45, especially with a young child. The Kanis family continued to live in Amersfoort after the war was over. Ingrid married an American soldier and moved to the United States. In 1971, Ingrid’s parents were honored by Yad Vashem in Israel as "Righteous Among the Nations."

Between 20,000 and 30,000 Jews were hidden in Holland during the war. This included the Frank family. Of this number, about 2/3 survived.

Ingrid is a member of the Holocaust Center for Humanity’s Speakers Bureau, and presents her family’s story to local students and community groups.