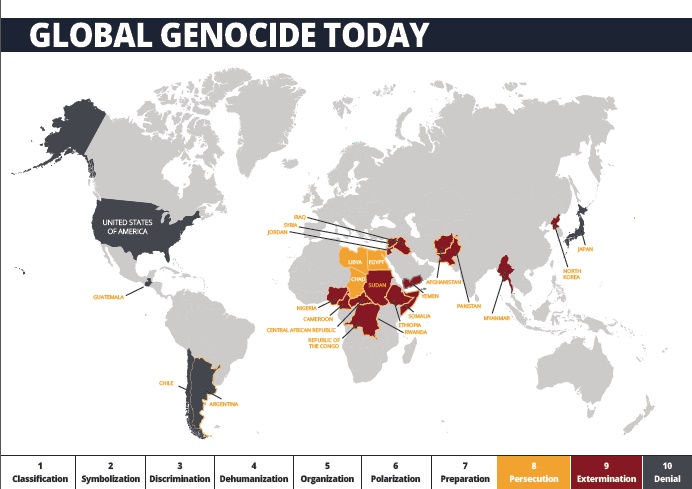 Genocide: An Introduction (PDF)
Includes an overview of Genocide in the past century, and a map of where genocide is occurring today. Created with the generous support of Nova Fisheries, Inc.

In 1944, Raphael Lemkin, a Polish-Jewish lawyer, introduced the word “genocide” to the English language. In his 1944 book, Axis Rule in Occupied Europe (published originally by the Carnegie Endowment for International Peace), Lemkin explains:

“This new word, coined by the author to denote an old practice in its modern development, is made from the ancient Greek word genos (race, tribe) and the Latin cide (killing)….”

On December 9, 1948, the United Nations approved the Convention on the Prevention and Punishment of Genocide (often referred to as the Genocide Convention) which defines genocide as the following:

...any of the following acts committed with intent to destroy, in whole or in part, a national, ethnical, racial or religious group, as such:
(a) Killing members of the group;
(b) Causing serious bodily or mental harm to members of the group;
(c) Deliberately inflicting on the group conditions of life calculated to bring about its physical destruction in whole or in part;
(d) Imposing measures intended to prevent births within the group;
(e) Forcibly transferring children of the group to another group.
– Convention on the Prevention and Punishment of the Crime of Genocide, Article II

"Genocide is a process that develops in 10 stages that are predictable but not inexorable. At each stage, preventive measures can stop it. The process is not linear....Logically, later stages must be preceded by earlier stages. But all stages continue to operate throughout the process." -Gregory H. Stanton, President, Genocide Watch

STORIES AMONG US: PERSONAL ACCOUNTS OF GENOCIDE
A Newspapers In Education Series, published in the Seattle Times, 2008
This 10-article series focuses on the stories of individuals in our community directly affected by genocide during the past century. Includes teacher guide with activities and study questions.

GENOCIDE PREVENTION ADVISORY NETWORK
The latest updates from international scholars and reserachers tracking genocide around the globe.  Want to know where gneocide is happening today?  This is the place to look.

UNITED TO END GENOCIDE
Genocide Internvention Network and Save Darfur Coalition joined to create "United To End Genocide." United to End Genocide is the largest activist organization in America dedicated to preventing and ending genocide.

LIBRARY
Check out the Holocaust Center's collection. All items are available to borrow. Call or email to inquire about specific materials in the Genocide category. This email address is being protected from spambots. You need JavaScript enabled to view it. or 206.582.3000