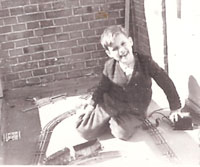 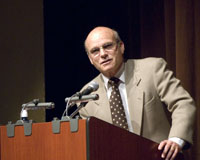 Peter M. was born in Amsterdam in 1935. In 1942, when Peter was 7 years old, the Nazis seized his entire family, except for Pete and his mother. Peter’s mother contacted the Dutch Underground for help. (The “Underground” refers to an organized group acting in secrecy to oppose the government or during war, to resist occupying enemy forces. USHMM.) The Underground found Klaas and Roefina Post who agreed to shelter Pete and his mother on their small farm in northern Holland, putting their own lives at risk.

The Posts treated us like family. My mother and I ate all of our meals with Klaas and Roefina and were also given chores to do around the farm. I remember helping him milk the cows and feed the chickens. Klaas was like a father to me, as I was without my father by then. He bounced me on his knee and I loved very much being his helper. I knew, even as a child, something was going on around me and it was not good. Besides doing some chores, we spent most of our days inside a barn, trying not to be seen. I could only play outside at night for a little bit, but only in an area where no one would be able to see me.

My mother and I slept together in a bed that was inside a closet. I remember lying in that bed trembling in fear at times. In the same room, Klaas had created a hiding place in the floor that we could hide in when Germans came to search the house. There was a handle on the inside of the floor boards so Mom could hold on to the handle making it difficult to be opened from the top.

The searches became so frequent that we could no longer stay in the Post's house. Klaas went out and dug a little cave in the side of a hill in the forest next to the farm for us to hide in. It was about ten feet deep and just wide enough for my mother and I lie in snuggly. There was an overhang of branches that we could pull in front of us to keep us hidden.

When there was word of a search, my mother and I would run out into the forest and hide in the cave. Sometimes, it seemed like we were in there forever.

After a while, it was unsafe for us to be there because we were putting Klaas and Roefina at risk. I was very sad that I had to leave the farm as it had given me a sense of being a family again.

We were directed to an apartment in The Hague (by the Dutch Underground) where we lived with two women. By this time, it was 1944 and I was nine years old. The women made my mother do chores. I remember thinking we were being treated like dogs. My mother had to clean and scrub the apartment but at least we were given shelter. I never felt attached to these women and remember a lot less about my time living with them than with the Posts. It was a very cold experience for me. After living with them for about six to eight months, we found out that the women were going to turn us in so we left. We had come so far already…

In 1992, I went back to Amsterdam. I wanted to try to find the Posts and the little farm we stayed on. I couldn’t even remember the name of the little town where the farm was but I was determined. I went to the library, looked at a map of Holland and found the name of a town called Makkinga that sounded familiar. With only this name, we set out and found the farm, which no longer belonged to the Posts. We even found the cave that my mother and I hid in. I couldn’t believe it was still intact. It was an unbelievably emotional experience for me to see the farm, cave, and relive those times.

Since that visit, I could not put the Posts out of my mind. I finally managed to trace down the Post’s two daughters. They remembered my mother and me, and sent photos of their parents as I requested. Both Klaas and Roefina had died at least 10 years ago. I have a very difficult time dealing with not having gone back sooner to hug and thank them for saving our lives. I will always have to live with this regret.

I am still in contact with one of the Post’s daughters and after a two-year plight, Klaas and Roefina Post are recognized by Yad Vashem (the Holocaust Museum in Israel) as Righteous Among the Nations.* The Posts' daughters and their family members attended a special ceremony in Rotterdam and received their parents’/grandparents’ award and medal. Klaas and Roefina Post are also listed as rescuers on a plaque in Israel.

I once asked the Posts' daughter why she thinks her parents did what they did for us. She responded saying that her dad never gave it a second thought, and that he felt like it was the right thing to do.

I truly believed that my mother and I belonged to the fortunate ones who survived World War II because of the goodness of the Klaas and Roefina Post. I will forever be in debt to them for what they did for my mother and me.

They saved our lives.

Peter M. is an active member of the Holocaust Center for Humanity’s Speakers Bureau.

* Since 1963, a commission, headed by an Israeli Supreme Court justice has been charged with the duty of awarding the title "Righteous among the Nations." When the data on hand clearly demonstrates that a non-Jewish person risked his (or her) life, freedom, and safety in order to rescue one or several Jews from the threat of death or deportation to death camps without exacting in advance monetary compensation, this qualifies the rescuer for serious consideration to be awarded the "Righteous Among the Nations" title. The recognized person is awarded a specially minted medal bearing his/her name, a certificate of honor, and the privilege of his/her name being added to those on the Wall of Honor in the Garden of the Righteous at Yad Vashem in Jerusalem.

To date, over 18,000 men and women have been recognized as Righteous Among the Nations.