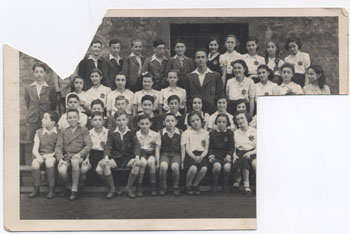 Photo on left: Frieda S. Taken from a 1940/41 school photo in Czechoslovakia, shown in the middle photo.  Frieda is standing just to the left of the instructor in the middle of the photo. She is wearing a white shirt.  Photo on right: Frieda S. in Seattle in 2008.

Why are corners of this photo cut out?  Scroll to the end of Frieda's story to find out about this photo.

In 1933, the Nazi party was elected in Germany and Adolf Hitler was appointed Chancellor. Hitler and the Nazi party quickly put into practice their belief that Germans were “racially superior.” Jewish people were not only defined as “inferior,” but became the primary target for Nazi hatred.

In 1943, at the age of 14, Frieda was deported to Theresienstadt, a concentration camp in her native country of Czechoslovakia, because she was a “mischling” – half Jewish. Frieda’s mother was not Jewish, but her father was. Against the odds, Frieda survived the Holocaust in Theresienstadt.

What I did know was that people around me were starved, beaten, shot and sent away on trains. I did know that I was taken from my home and my family; I was hungry all the time and made to work long hours. I know now that it is only because of luck that I survived.

My childhood before the war was filled with picnics, hikes, skating and celebrations. I grew up celebrating Passover and Christmas. I knew I was Jewish but religion was not a central part of my life. When Germany invaded Czechoslovakia, my religion came to define me.

In 1943, when I was 14, I was deported by train to Theresienstadt. My mother, who was not Jewish, didn’t have to go. My father was in a local jail for his political beliefs.

I was taken to Theresienstadt with others from my hometown, Ostrava.

I was tall and strong, so I was given the job of farming. Every day I worked planting, tilling, harvesting, and moving rocks. Sometimes I stole vegetables. I knew I would be shot if caught, but I also knew that this was keeping me and others alive. Although I witnessed daily horrors, somehow I grew-up. I had girl friends, I had my first kiss and I found ways to keep going.

Everyday the trains took people from Theresienstadt. We didn’t know where they were going but I thought it had to be a place better than this. One day although not on the list, I stood in line to get on the train. As I tried to board the train a Nazi SS officer yelled at me and told me to go back. I was so angry. Later, when I learned the trains took people to Auschwitz, I realized I was lucky – the Nazi officer saved my life.

My father and brother were deported to Theresienstadt a few months before the war ended. When the Russians liberated Theresienstadt in 1945, my father stole a horse and wagon from a nearby farm and loaded it with children from Ostrava who had survived Theresienstadt. He took us all back to our hometown. When we returned to Ostrava many of the children found they had no home or family left. They came to live with me and my family until they could find a place to go.

When I was 18 I decided to go to Israel. I met my husband Aaron in Haifa. We had three children and then immigrated to the United States. I now live in Seattle, my children are grown, and I have 5 grandchildren and 2 great-grandchildren.

In a lecture my daughter gave recently she said she is proud of survivors because they bear witness with dignity. I think that so many of us are humbled by the guilt that we survived, while others did not. We are reluctant to share the fact that we witnessed cruelty and inhumanity in its most unimaginable form, but we also feel lucky. For us, bearing witness with dignity is not an option - it is a continuing act of survival.

Frieda is a member of the Holocaust Center's Speakers Bureau.

1. Look at the photo carefully. What do you notice about this photo? Why do you think some of the faces are cut out of the photo?

This is Frieda’s school photo in 1940/1941. Frieda is standing just to the left of the instructor in the middle of the photo. She is wearing a white shirt.

You might notice that all of the students and the instructor are wearing Jewish stars sewn onto their clothing. This was a Jewish school. After the Nazis occupied Czechoslovakia, Jewish students were no longer allowed to attend public schools.

Some of the people in the photo are cut out. After Czechoslovakia was liberated from Nazi control, Frieda found that only a couple of her former classmates survived. These survivors had nothing left – no photos of themselves, their families, or their friends. Frieda cut their pictures out of this photo to give to them.