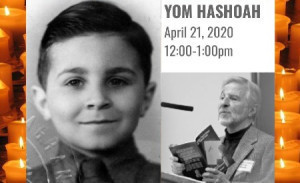 George Elbaum was born in Warsaw, Poland on August 20, 1938. George's mother, acutely aware of the danger she and her son were in, purchased the identification documents of a Catholic woman who had died. In 1942, she smuggled George out of the Warsaw ghetto and paid various Polish Catholic families to hide and raise him.

Rabbi Daniel Weiner is the senior rabbi at Temple De Hirsch Sinai, one of the largest reform congregations in the Pacific Northwest. He is passionate about social justice and collaboration between religions and religious leaders.

Remember one of the six million - light a virtual memorial candle.

Yom Hashoah, or Holocaust Remembrance Day, commemorates the 6 million Jews and millions of others who were killed in the Holocaust. The date is set in accordance with the Hebrew calendar, on the 27th of Nisan, so that it varies in regard to the Gregorian calendar. The date was chosen to mark the beginning of the Warsaw Ghetto Uprising.

Funding for this program was made possible, in part, by a grant from the Jewish Federation of Greater Seattle.

Thank you to our Community Partners: