Join us for our Lunch-and-Learn series to hear children and grandchildren of Holocaust survivors, notable speakers on timely issues, and historical experts.

These programs aim to present perspectives and voices that challenge and inspire people to confront bigotry, racism, and indifference, and to consider how their actions make a difference.

Disclaimer: The views, information, or opinions expressed in these programs are solely those of the individuals involved and do not necessarily represent those of the Holocaust Center for Humanity and its employees.

All programs are virtual on Zoom. Register for one program or multiple.

REGISTER NOW FOR ONE PROGRAM OR MULTIPLE! 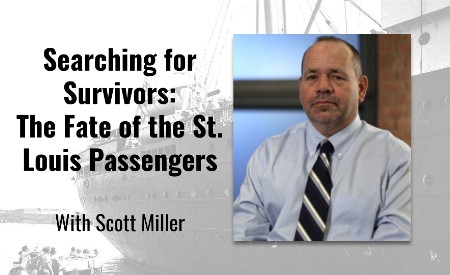 Searching for Survivors: The Fate of the St. Louis Passengers

In early June of 1939 the St. Louis, a ship carrying 937 refugee passengers – almost all of them Jews fleeing Nazi Germany – was denied entry into both Cuba and the United States. After sailing off the coast of Miami Beach and with no refuge in sight, the St. Louis had to sail back to Europe.

The story of the St Louis has become a symbol of America’s indifference to the plight of Jews during the Holocaust. The fate of the ship’s passengers, however, remained an unsolved mystery for over sixty years. Scott Miller will discuss his decade long search to uncover the fate of every passenger on board this famous and fateful journey.

Scott Miller was a founding staff member at the United States Holocaust Memorial Museum, where he worked for 30 years (1989-2019), and is the co-author (with Sarah Ogilvie) of Refuge Denied – The St. Louis Passengers and the Holocaust (University of Wisconsin Press: 2006) -- the story of their search for the St. Louis passengers.

Scott managed and was spokesperson for the Holocaust Museum’s Rescue the Evidence initiative – the program to build the collection of record on the Holocaust through the acquisition of primary source and original research materials. In this capacity directed the museum’s archival, artifact, photo, film, music and oral history collections.

Currently Scott is a curatorial consultant for the Museum of Jewish Heritage in New York City. 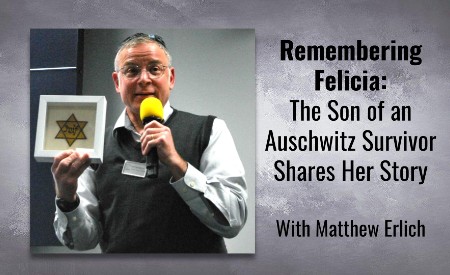 Remembering Felicia: The Son of an Auschwitz Survivor Shares her Story

Felicia Lewkowicz, was born in Krakow, Poland in 1923. Felicia was one of seven children, four girls and three boys. In the spring of 1941, Felicia and one brother were sent by the Nazis to the Krakow ghetto while her mother and other siblings were sent to Tarnow, 70 miles from Krakow. Luckily, Felicia was able to get work outside the ghetto, cleaning the offices of German officers. One day, she did not return to the ghetto, escaping onto a train which would take her to Vienna, Austria. On the way, she stopped in Tarnow where she saw her family for the last time.

In Vienna, Felicia was able to acquire false identity papers and found work in a hotel.  When a friend was caught smuggling clothes, a photo of Felicia was found among the clothes and she fled the hotel for fear of being caught. The authorities caught up with Felicia and she was sent to Auschwitz as a political prisoner.

Against all odds, Felicia survived Auschwitz and Bergen Belsen. She met her husband in a displaced persons camp in Germany and later moved to Canada before moving to the United States. Felicia's son Matthew Erlich tells her incredible story. Matthew is a member of the Holocaust Center's Speakers Bureau. 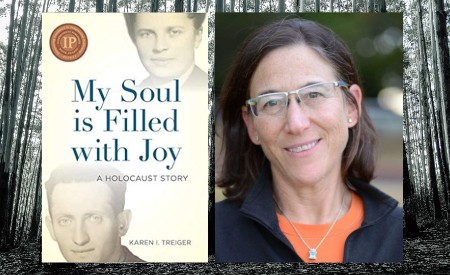 My Soul is Filled with Joy: A Holocaust Story

The award winning book, My Soul is Filled with Joy, tells how Sam and Esther Goldberg met in the Polish forest – just outside of the Treblinka Death Camp. It was August 3, 1943, just one day after Sam escaped the camp during a prisoner uprising. With 870,000 murdered at Treblinka, Sam was one of approximately 65 to survive and live until the end of the war. Esther had been hiding in that patch of forest for a year and was out that morning, looking for mushrooms to eat. They met and after hearing of the prisoner revolt, she took him to the Righteous Gentiles who, at great danger to themselves, hid them in their barn for three days while the Nazis, Ukrainians and Poles scoured the area looking for escapees. Deciding to stay and hide with Esther, they dug a forest pit where they “lived” when it was not freezing. They subsisted in the pit and the barns – hungry, cold, and scared – for another year until they were liberated by the Red Army in July of 1944.

After four years in Displaced Persons Camps, they arrived in New York Harbor to build a new life. Local author Karen Treiger, is Sam and Esther’s daughter-in-law. She and her family traveled to Poland to walk in Sam and Esther’s footsteps and to meet the children of the Righteous Gentiles that helped them survive.

Karen Treiger retired from her law practice in 2015 to research and write her in-laws’ story of survival during the Holocaust.  She graduated from New York University Law School, with honors, in 1988, where she served as Editor-in-Chief of the Law Review.  She lives in Seattle and is an accomplished and dynamic speaker. Karen has presented at many Continuing Legal Education Conferences, community events, and is a member of the Holocaust Center's Speakers Bureau. 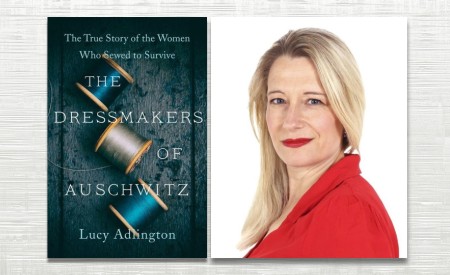 The Dressmakers of Auschwitz: The True Story of the Women Who Sewed to Survive

The Dressmakers of Auschwitz powerfully chronicles the stories of the women who used their sewing skills to survive the Holocaust, stitching beautiful clothes in an extraordinary fashion workshop within the Auschwitz concentration camp.

At the height of the Holocaust twenty-five young inmates of the infamous Auschwitz-Birkenau concentration camp – mainly Jewish women and girls – were selected to design, cut, and sew beautiful fashions for elite Nazi women in a dedicated salon. It was work that they hoped would spare them from the gas chambers.

This fashion workshop – called the Upper Tailoring Studio – was established by Hedwig Höss, the camp commandant’s wife, and patronized by the wives of SS guards and officers. Here, the dressmakers produced high-quality garments for SS social functions in Auschwitz, and for ladies from Nazi Berlin’s upper crust.

Drawing on diverse sources – including interviews with the last surviving seamstress – The Dressmakers of Auschwitz follows the fates of these brave women. Their bonds of family and friendship not only helped them endure persecution but also to play their part in camp resistance. Weaving the dressmakers’ remarkable experiences within the context of Nazi policies for plunder and exploitation, Lucy Adlington exposes the greed, cruelty, and hypocrisy of the Third Reich and offers a fresh look at a little-known chapter of the Second World War and the Holocaust.

Lucy Adlington is a British historian and writer with more than twenty years’ specialisation in social history. Her previous non-fiction titles include Stitches in Time: The Story of the Clothes We Wear and Women’s Lives and Clothes in WW2: Ready for Action. Her fiction titles include the award-winning young adult novel The Red Ribbon. She runs the History Wardrobe series of costume presentations, and has an extensive collection of vintage and antique clothing. 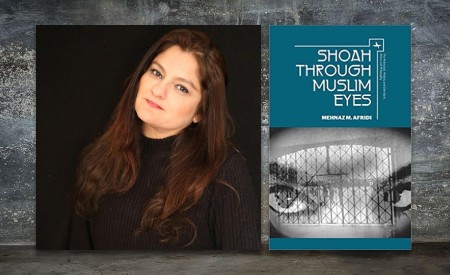 The Holocaust through Muslim Eyes

Author and scholar Mehnaz Afridi will discuss her book, Shoah through Muslim Eyes, which describes her journey with Judaism as a Muslim. Her book is based on the struggle of antisemitism within Muslim communities and her interviews with survivors. Rejecting polemical myths about the Holocaust and Jews, Afridi offers a new way of creating understanding of two communities through the acceptance and enormity of the Shoah. Her journey is both personal and academic as she reflects on the impact of the Holocaust, her interviews with survivors, antisemitism and Islamophobia, and Islam and memory.

Dr. Mehnaz Afridi earned her PhD in Religious Studies from the University of South Africa. She currently serves as Assistant Professor of Religious Studies and Director of the Holocaust, Genocide, and Interfaith Education Center at Manhattan College (Riverdale, NY). Her research interests include the Holocaust; interreligious identity; post-genocide identity; Diaspora and Transnational Studies; and feminist post-colonial theory. Her publications and presentations have focused on the Qur'an and human rights, Islamic Literature and Culture; Judaism & Islam, Holocaust and antisemitism, including her co-edited book, Global Perspectives on Orhan Pamuk: Existentialism and Politics (Palgrave MacMillan, 2012). She received a National Endowment for Humanities Institute Grant in 2006 to study Venice, the Jews, and Italian Culture: Historical Eras and Cultural Representations; a Coolidge Fellow Grant from Union Theological School in 2003; and attended the Hess Seminar on Teaching Testimony and Holocaust at the United States Holocaust Memorial Museum in 2011. She has been a Board Member of the Raoul Wallenberg Institute of Ethics since 2004. 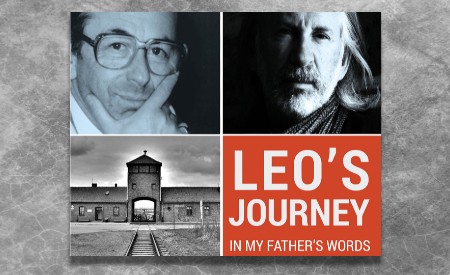 Leo’s Journey – In My Father’s Words

Auschwitz-Birkenau concentration camp was the place where nearly 1.2 million jewish prisoners were exterminated, but it had another equally dark and tragic secret. It was ground zero for one of the largest human experimentation programs in the world.  Where doctors performed horrific experiments on live prisoners, with a specific focus on twins.  One of those twins was a 15-year-old boy named Leopold Lovi.  (Leo Lowy).

Leo miraculously survived and went on to live a long and productive life, but the memories of what he and his twin sister Miriam had endured at the hands of Dr. Josef Mengele stayed with him until his dying days. Before he passed away in 2002, Richard encouraged his father to share his story so what Leo and the other twins endured, would never be forgotten.

The BC Ministry of Education and BC Teacher’s Federation have both endorsed and presented "Leo’s Journey - In My Father’s Words" for the past 2 years on the Anniversary of the Liberation of Auschwitz-Birkenau to all the High Schools and Universities in British Columbia. “In My Father’s Words” has been presented to full houses in the Canadian Museum for Human Rights, Johannesburg & Cape Holocaust & Genocide Museums (in association with the Apartheid Museum), the Vancouver Holocaust Educational Centre, Phoenix Holocaust Association, Schara Tzdeck Synagogue, UBC Holocaust Symposium to name a few.

Richard is currently developing a theatrical production of his father’s story.

Thank you to our 2021 Lunch-and-Learn Sponsors:

Thank you to our 2022 Lunch-and-Learn Sponsors:

Thank you to the grantors, companies, and individuals who have made this year's Lunch-and-Learn series possible. If you or your company are interested in sponsoring one or more Lunch-and-Learns throughout the year, please contact Ilana Cone Kennedy: This email address is being protected from spambots. You need JavaScript enabled to view it..