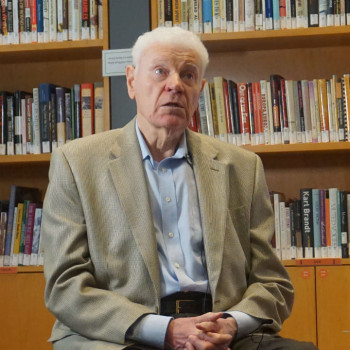 Izzy Darakhovskiy was born in 1936 and grew up in Yampol, Ukraine, then part of the Soviet Union. He was a young boy of five when the Germans invaded Ukraine in 1941. Not long after, Izzy and his family were forced to move to a ghetto in town. In September 1942, Jews from Yampol were rounded up and deported to a slave labor camp. Izzy and the other prisoners lived in primitive barracks made out of thin wood, with 35 people in one room. People were hungry and cold all the time, and the work never ceased. Izzy saw Nazis shoot and kill his own grandfather because he was unable to work.

The camp was liberated by the Soviet Army in 1944. Izzy returned to Yampol, but the war continued for several months, and then a sever e famine made life very difficult. Izzy’s father returned from the front lines, but many, many men in the community had died or were seriously injured. Moreover, during this time antisemitism remained prevalent in the society and politics of the Soviet Union. The suffering of Jews during the Holocaust was not recognized, and Jews faced obstacles to go to school or get jobs.

Izzy has been asked to lecture at the United Nations, the United States Holocaust Memorial Museum, the Woodrow Wilson Center , and other institutions. He has also written nine books, including a memoir and a book for children inspired by his granddaughters. Izzy is a current member of the Holocaust Center’s Speakers Bureau.