Learn more and register for our Voices for Humanity Virtual Luncheon. REGISTER TODAY

Learn more about our impact in our community! Read more

Learn how to implement Best Practices for teaching the Holocaust. LEARN MORE 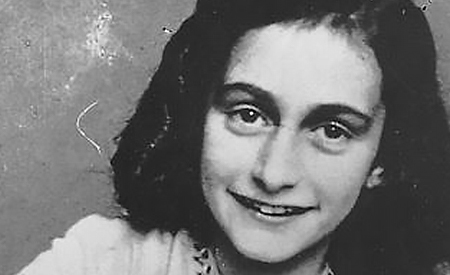 March 4 - May 30, 2018 | Henry and Sandra Friedman Holocaust Center for Humanity

The exhibition Let Me Be Myself - The Life Story of Anne Frank had its world premiere in 2015. Since then it was introduced worldwide in several countries. Let Me Be Myself contains a chapter in which young people of today address subjects like identity, exclusion, and discrimination.

Making use of large size pictures, the exhibition Let Me Be Myself - The Life Story of Anne Frank shows the story of Anne Frank from her birth in 1929 up to her death in the Bergen-Belsen concentration camp in 1945. Each exhibition panel also contains images and texts about the world around Anne Frank: the rise of Hitler, the persecution of the Jews and the Second World War.

One-third of the exhibition is dedicated to stories of young people today. This part also contains several film clips. The visitors get to know how these youngsters see themselves, but also how strangers respond to them. This makes clear what the role of prejudice can be and how this can lead to exclusion and sometimes even discrimination.

The exhibition has several objects on display, among them: a replica of the diary of Anne Frank and a scale model of the hiding place.
This exhibit is suitable for grades 5 and up.

Anne Frank: Let Me By Myself is made possible with funding from our Lead Sponsor, Debbie Killinger.